You can’t click it! It might sound like a variation of a MC Hammer number but that’s exactly what the new iPhone 7 and iPhone 7 Plus home buttons are all about. While the buttons look similar to those on the iPhone 6s and iPhone 6s Plus, Apple has made them to give haptic feedback. So instead of pressing the home button to make Touch ID work, you would now just have to keep your finger on it.

It is not exactly new as we had first seen such an implementation on the OnePlus 2 and has been implemented on many smartphones since then, especially if we consider all the Chinese smartphones that come with the fingerprint sensor on the back. The new Touch ID home button should not be confused with Force Touch that Apple has implemented on the trackpad of its recent MacBook lineup. 3D Touch on the iPhones will continue to work as they did earlier by pressing the touchscreen with more force than usual. The button now also offers unique taptic feedbacks for actions, messages, notifications, ringtones, and other apps through the Taptic Engine API.

The new home button makes a lot of sense, especially if we consider the changesApple has made to the lock screen in iOS 10, where it killed the iconic swipe to unlock UI that has remained on the iPhone since 2007. Now users are forced to press the home button to unlock the phone and in case Touch ID doesn’t recognize the fingerprint, it asks for a passcode. With iOS 10, swiping left on the homescreen reveals a new Spotlight search with customizable widgets and swiping right takes users to the camera.

This would work exceptionally well with the new home button where it would remove one step of pressing the home button. Now users just need to place their registered finger on the home button and the iPhone would unlock. 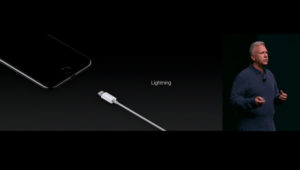