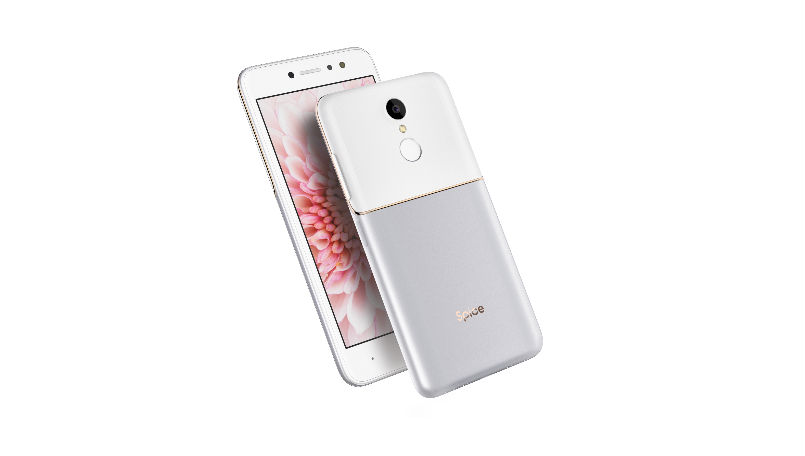 Spice has launched a new smartphone called V801. The smartphone is priced at Rs 7,999, and is available with a one year replacement warranty. This is the fifth Spice smartphone under the joint venture of the company with Transsion Holdings. Following its partnership in February this year, the re-branded Spice has so far launched four smartphones and five feature phones.

In terms of design, the Spice V801 flaunts a metal body with a matte finish and gold borders. At the rear, there’s a circular fingerprint sensor just below the camera lens. The fingerprint sensor other than unlocking the smartphone, can also make calls and launch apps. It can also be customized to access private files and folders. The Spice V801 allows users to access two social media accounts at the same time for apps like Facebook, WhatsApp, Instagram, and Twitter.

The Spice V801 features a 5-inch HD display with a 2.5D glass on top. Under its hood runs a quad-core MediaTek processor clocked at 1.25GHz paired with 3GB of RAM. The smartphone comes with 16GB of internal storage, which is further expandable up to 32GB via a microSD card. In the photography department, the Spice V801 sports an 8-megapixel rear camera of f/2.0 aperture, auto-focus and advanced image processing. Up front, there’s an 8-megapixel camera as well, accompanied with flash and features like Beauty Mode and Facemask.

For connectivity, the Spice V801 offers dual-SIM slots along with a third tray for microSD card, 4G VoLTE and ViLTE (Video over LTE), Bluetooth, and Wi-Fi. On the software front, the smartphone runs Android 7.0 Nougat out-of-the-box. The smartphone is fueled by a 2,700mAh battery.

Speaking about competition, the Spice V801 would go against Coolpad’s Note 5 Lite C. Priced at Rs 7,777, the Coolpad Note 5 Lite C has a 5-inch full HD display, Snapdragon 210 SoC, 2GB of RAM, and 16GB of expandable storage. For photography, it sports an 8-megapixel rear and 5-megapixel front camera. Armed with a 2,500mAh battery, it runs Android 7.1.1 Nougat on the software front.

« Apple iPhone X, iPhone 8, iPhone 8 Plus support fast charging, but at an extra cost
Nokia 2 leaked renders hint at a Nokia 3-like design »