While phones with wraparound displays are yet to materialize on a commercial scale, LG seems to be busy working on a smartphone with a dual edge P-OLED screen. The prototype is being showcased at the ongoing CES 2015 and looks a bit like the Samsung YOUM concept device which was exhibited at last year’s event.

Now we already know what LG can do with Plastic-OLED displays owing to its curved G Flex phones. The new dual edge handset that was shown to a select group of folks (pictures published by inews24) at the CES 2015, brings us closer to the idea of wraparound touchscreens. Samsung has implemented something similar in its Galaxy Note 4 Edge, of course. 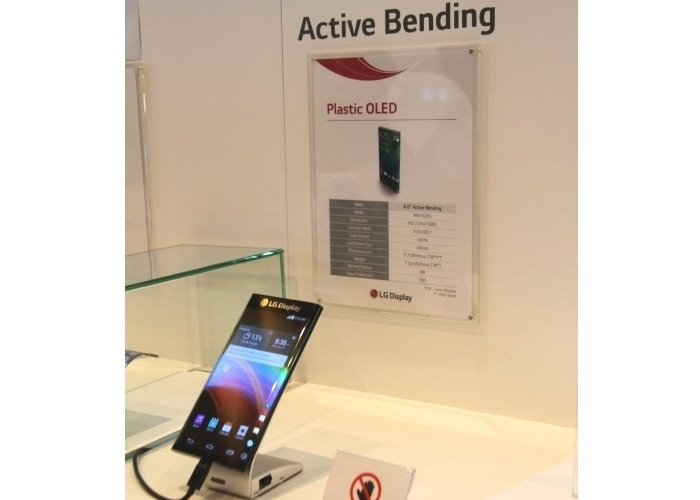 The two South Korean rivals never miss a chance to show each other up, which is the reason why the tech world was introduced to the hardly viable G Flex and Galaxy Round last year. LG’s dual edge P-OLED phone appears to have a 6-inch display of a disappointing 720p resolution. If you’re going to give us a bendable handset, you might as well put bleeding edge specs on it.

No information about specifications have surfaced apart from the details about the screen. Android Authority notes that LG Display offered a sneak peek of the device to a select group of biggies during a special CES 2015 meeting. Remember how critics panned the G Flex for carrying a large 6-inch panel whilst delivering unimpressive visuals and features?

Well, its successor has a smaller one of 5.5 inches which spews out pictures in 1080p full HD resolution. While LG works on its dual edge P-OLED display smartphone and rumors of a Samsung Galaxy S6 with double dipped touchscreens persist, what we really want to see is something like the Nokia Gem arrive in the market.