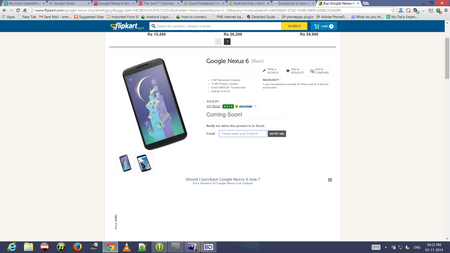 Google’s next flagship smartphone, Nexus 6, has been listed online on e-commerce website, Flipkart.com with a ‘coming soon’ tag. The price of the device has not been mentioned.

Built by Motorola, the Nexus 6 smartphone was announced by Google last month. The phone looks like a larger version of the new-generation Moto X and sports a 6-inch QHD(2560x1440p) display. It features dual front-facing stereo speakers,and a brushed aluminium body.

The phone is powered by a 2.7GHz quad-core Snapdragon 805 processor and 3GB RAM, and comes in 32GB and 64GB storage variants. The version listed on Flipkart has 32GB storage. The phone has a 3,220mAh battery and runs Android 5.0 Lollipop, the latest version of Google’s mobile operating system.

Motorola exclusively sells its devices on Flipkart so it’s possible that the company will sell the Nexus 6 only on Flipkart. In a recent press note, Motorola had said that Nexus 6 will be available with the company’s partners starting in November and that the phone will come to 28 countries, including India. Since Google also sells Nexus devices on its Play Store, it’s possible that the phone may be sold on its online marketplace.